When People Are Mean

My youngest son Peyton is such a likeable little guy. He’s funny, intelligent, and social. He’s a wonderful wordsmith, if I do say so myself (I’m a little biased, of course). He loves sports, mostly talking about sports, and he says he wants to be a sportscaster when he grows up, which would put all of his talking and word skills to good use. 🙂 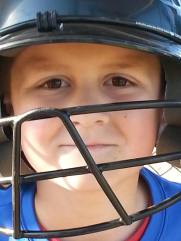 He likes to make friends and he sincerely looks for the good in most people.

It started almost at the beginning of the school year.

We were driving home from school and he was genuinely concerned for his classroom, and this child who was not listening to the teacher.

Now I was tired. First-days-of-school-kindergarten-teacher tired. I don’t even remember what my initial responses were to Peyton’s concerns, but I know that I gave some kind of generic response that may or may not cover bases when your child asks you about a kid who could be considered “bad”.

After awhile, though, it became the norm for Peyton to lament about this one student in his room who just seemed to go out of his way to make…everybody…miserable.

“He breathed in my face. On purpose.”

“He lost all his cards.”

“He went to the principal.”

“He made the girls cry.”

“He called me an ugly word.”

“He pushed me down and kicked dirt on me.”

Now, on those last two, ‘ole Mama-zilla may have come out, except that I knew from the rest of Peyton’s stories that his wonderful teacher was promptly and appropriately addressing each situation. While it bothered me that this kid was messing with my kid, I realized that Peyton was not the only target–everyone was–and I trusted his teacher to take care of him.

As the reports kept rolling in day after day from Peyton, who seemed to have a photographic memory of each day’s events, I started to notice a change in my son.

It was almost as if he relished  thought of “telling on” this kid who was bent on going in a different direction from the rest of the class. And while I understood that yes, this child was difficult; yes, he was defiant; yes, he was different; I also began to see that he was very unliked.

By everyone. Even my sweet little boy who’d always looked for the best in others.

My responses of “Did you tell your teacher?”, “What did the teacher do?”, and “Well, you just need to ignore him,” were not working.

So one day, I simply said to Peyton, “You need to pray for him.”

Instead, I stew. I fret. I stay awake and replay words and what I should have said. I mentally compose what I’ll do the next time I see that person or their parents.

Recently, I came across this gem of a verse in James chapter 15.

Okay, the obvious “church” answer for when you can’t get along with someone is to pray for them. However…the last section of that verse is the part that stands out to me.

That you  may be healed.

When we pray for others, we are the ones who change the most. Our hearts are softened and tuned to the voice of our Father. And our Father reminds us that all people are His children, lovingly crafted and created by Him. Who knows what plans He is working in their lives at the very moment we cross their paths? Who knows what seeds He is planting through us, our actions and reactions to difficult situations with difficult people?

So my whole family started praying for the  guy in Peyton’s classroom. And Peyton still reported the mishaps, though they kind of started tapering off. Then one day, my little boy said, “I don’t know if anyone has ever been nice to him.”

And my heart stuttered.

My boy the wordsmith, who had been praying for his classmate, had gotten a heart-change and so simply stated what was really wrong here.

His soul was more tuned to the Savior, and he heard and passed on what my Father had been trying to tell me all year. “This is My child. Love him like I do.”

So we decided that Peyton would say something nice to the guy every day. Just one thing every day for a week, and we’d see what happened when someone was nice to him.

On the first day, Peyton told us that he said, “I like your shoes” to the boy.

“What’d he say? What’d he do?!?” Parker, my oldest, asked. He’d gotten into this whole story with the rest of us.

For the next two days, Peyton said a few superficial compliments to the kid, such as “I like your shirt” or “Those are neat jeans.” He never really got a response at first.

For one, we realized that Peyton did not even have his attention. I actually recognized two things here: that my son was not really used to getting someone’s attention to say things that could be considered different or important or unusual and also that this little man was not used to people complimenting him. On one occasion, I think Peyton yelled “You’re a good runner!” as the boy ran by, and he obviously didn’t hear the words. In fact, another child beside Peyton turned to him and said, “Thanks!” 🙂

3. Giving them a compliment. A real one.

So you can believe the next week that Peyton went back to school armed with his new skills and more prayer, ready to be nice to someone who had been difficult.

The first day, he walked up to the other child’s desk and said, “I like the way you drew this picture, it looks really good.” The child looked at him and said, “Me?”

Peyton confirmed, and the kid smiled. He smiled, bless his soul.

The next day, Peyton told him he was a good singer. (I guess they’d been singing?) He said, “Thanks.”

You would’ve thought that Peyton had won a huge award, and in a way, he did. I don’t say all of this to brag on my son, although I am so proud of him.

I say this to point out that praying healed us. It healed my son from bitterness, frustration, and a judgemental heart when someone was being mean. The prayers healed this Mama’s heart, too, from worry and it helped me to realize that I don’t have to hover like a helicopter, ready to swoop down and rescue my kids when someone is unkind to them.

I am convinced that the solution to meanness is prayer.

Sometimes the prayers don’t seem to visibly and immediately change the situation, but they will always change us.

12 Responses to When People Are Mean