Away In A Manger

“6While they were there, the days were completed for her to give birth. 7And she gave birth to her firstborn son; and she wrapped Him in cloths, and laid Him in a manger, because there was no room for them in the inn.”  Luke 2:6-7

He took His first breath of our flawed air in a borrowed stable. There was no room left to give Him. The crowds gathered in the town were carrying on with their responsibilities as always, unaware that the Savior they’d been waiting for was here.

Did the wind know? Did it sing along with the music of the Messiah’s newborn cries? Did it whisper He’s here! to the trees? Did they sway with the wind, in praise of their Creator, Who had come to earth? Did the animals know that their Master was among them, sleeping in their manger? 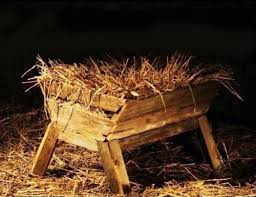 Heaven knew. Their precious Jesus had left them for a time. God’s Son, the treasure of heaven and earth, had left glory to go to a people that gave Him their leftovers.

The innkeeper gets a bad rap sometimes. I’ve condemned him several times in my soul. He seriously had no more rooms? Couldn’t he have made room for the King of Kings? But He didn’t know that the Lord was close at hand that night.

He knew this was how we’d be. He knew what we’d do. He knew what it would take to save us, and yet He still came that night two thousand years ago as a Baby to sleep in a manger, on a borrowed bed of hay.

He came, knowing that He would die for us.

Some thirty-three years later, He would borrow another resting place after His death on the cross.

“57 Now when evening had come, there came a rich man from Arimathea, named Joseph, who himself had also become a disciple of Jesus. 58 This man went to Pilate and asked for the body of Jesus. Then Pilate commanded the body to be given to him.59 When Joseph had taken the body, he wrapped it in a clean linen cloth, 60 and laid it in his new tomb which he had hewn out of the rock; and he rolled a large stone against the door of the tomb, and departed. ”    Matthew 27: 57-60

He was placed in a borrowed tomb. For three days. When Mary Magdalene came to the tomb on the third day, she found it empty.

“11 Now Mary stood outside the tomb crying. As she wept, she bent over to look into the tomb 12 and saw two angels in white, seated where Jesus’ body had been, one at the head and the other at the foot.

“They have taken my Lord away,” she said, “and I don’t know where they have put him.” 14 At this, she turned around and saw Jesus standing there, but she did not realize that it was Jesus.

Thinking he was the gardener, she said, “Sir, if you have carried him away, tell me where you have put him, and I will get him.”

She turned toward him and cried out in Aramaic, “Rabboni!” (which means “Teacher”).

17 Jesus said, “Do not hold on to me, for I have not yet ascended to the Father. Go instead to my brothers and tell them, ‘I am ascending to my Father and your Father, to my God and your God.’”

He took His first breath as the Risen Lord in a borrowed tomb. There was no grave that could hold Him. The followers and accusers alike were carrying on with their responsibilities as always, either in sadness or false triumph, unaware that the Savior they’d seen crucified was here, living and breathing again.

Did the wind know? Did it sing along with the music of Mary’s cries? I have seen the Lord!  Did it whisper He’s alive! to the trees? Did they raise their branches and leaves with the wind, in praise of their Creator, Who had risen from the dead? Did creation know that Jesus had defeated death and walked among it once again?

Heaven knew. I’m sure the angels were rejoicing with a thunderous roar when their treasured King breathed life again and defeated the enemy once and for all.

Do you know He’s alive? Do you know the Lord is close at hand? Does He have your first fruits or your leftovers?

You see, He left the glory and wonder of His home, of heaven. He left to come and be near to us, with all of our shortcomings and failures. He came for us, so that we could be with Him in heaven some day.

Thank you, Jesus, for being near to me.

This entry was posted in Devotionals, Music and Songwriting and tagged Away In A Manger, Jesus and Heaven, Jesus born in a manger, Jesus born in a stable, Jesus in the borrowed tomb, Jesus raised to life, Jesus' birth, Jesus' life and death, Mary Magdalene and Jesus. Bookmark the permalink.

14 Responses to Away In A Manger