My husband Chris is a wonderful father to our two little boys. He plays with them, laughs with them, follows through with what he tells them. He listens to them and disciplines them, because he loves those boys. He’s a good father.

He’s a good father because he had a good example. 21 years ago, his mom married the man who has been Chris’s dad since Chris was 12. The dad who took him to church and read the Bible to and with him. The dad who played basketball with him and went with him to buy his first truck. The dad who prayed with him. The one who drove him to pick me up on our first “date” when we were teenagers. The dad who never missed his football games in high school. The dad who our boys call Papa, because he is their grandfather on their daddy’s side.

Yes, my husband was blessed with a good father here on earth right when he needed one. But there were some hard “in-between” years when his mama had to do the work of both mom and dad for Chris and his brother. These were years that are considered pivotal in the lives of most children. Nine, Ten, Eleven years old. His mom loved her boys so much that she worked her fingers to the bone to provide a life for their little family all by herself.

A few years ago, my husband struggled  when he remembered that time in his life. Especially around Father’s Day. I remember him saying to me on one Father’s Day, “I didn’t have anyone to teach me how to shave…”

And there was so much packed into that statement. While he knew without a doubt that his mama loved him with a fierce, steadfast love–and has never stopped– he acutely felt the loss even all these years later of that father figure in his life before God brought the wonderful man he now calls dad to his family.

“Before I formed you in the womb I knew you, before you were born I set you apart…” Jeremiah 1:5

We have such a good Heavenly Father. A Father that Chris was able to carry his pain to even as an adult many years away from the sad little boy that wanted a dad and didn’t even have words to express that at the time.

As he prayed in his struggle, Chris knew that even as a child, he had a Father. A Father who heard him, who held him, who loved him.

You have a Father. He loves you. He sees you. He knows your pain. Even the things you don’t have words for…the little things that you think no one will understand.

And sometimes, He lets you know that He cares about those “little” things in a very real, very profound way.

Not even a week after Chris uttered those words out loud a few Father’s Days ago, we were going through some old photographs and we found this picture, which I believe without a doubt was sent straight from Heaven.

This is a picture of Chris and his precious Granddaddy…shaving.

Our Father in Heaven knew that His child would need this reminder that he had not been forgotten in those “in-between” years. He had given Chris a most special father figure in his granddaddy, and in his Uncle Wayne, and his Uncle Donnie. Chris and I both were reminded of what a good, good Father we serve. A Father who listens to us, to even the tiniest details, which really aren’t that tiny at all.

What a good, good Father. He knew my husband before he was born. He set him apart to be the wonderful husband, father, and leader that he is today. 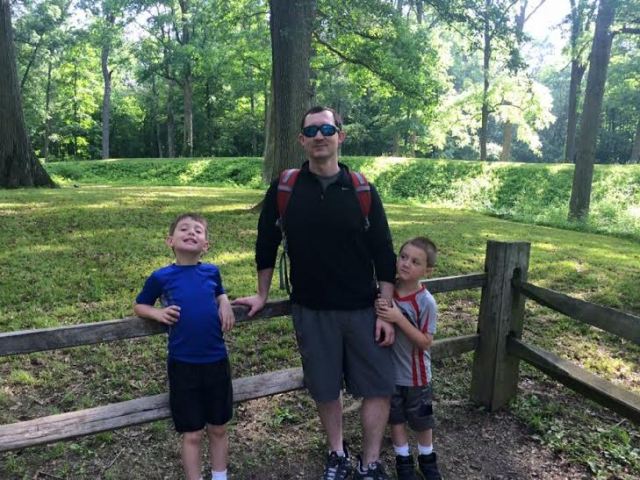 Thank you, Lord, for being such a good, good Father.

I have to share this song, that’s not mine, of course! Listen and sing along to our Father!