Is My Child Too Young to Become a Christian?

Jesus said, “Let the little children come to me, and do not hinder them, for the kingdom of heaven belongs to such as these.”   Matthew 19:14

When our son Parker was tiny–about three–he heard a song on the radio about “working on a road that leads to glory” sung by some of our favorite groups, Jeff and Sherri Easter. This quickly became Parker’s signature song. He sang it all the time for his family and grandparents, much to our delight. One day we were driving to his preschool and he said, “Mama, where is that road that leads to glory?”

Que the uuhhhh‘s. I was like, “How’s this going to go with a three year old?”

Thus began the discussion of heaven with Parker. I prayed as I talked, knowing Jesus could take my words and turn them into meaning for this child. Shortly after this discussion, Parker’s great-grandfather went to be with Jesus in heaven. This made heaven real and relevant to Parker for the first time. He knew someone who lived there. He said “I want to go to heaven, too.”

I told him in what I prayed was his language that we had to ask Jesus into our heart and let Him live there if we wanted to go to heaven. I knew there was more to becoming a Christian, like realizing we are sinners and repentance of sin. Of course, Parker immediately prayed, “Jesus, come into my heart.”

It was sweet and precious. But I knew it wasn’t very meaningful to this three year old yet, as he had moved on seconds later to a new topic. However, a seed had been planted.

A few years later, during Vacation Bible School, Parker really began to understand his need for salvation. He heard words that had surrounded him since birth, and he started to soak in these timeless truths. He came home and told me that we were all born with a dirty, black heart. That sin made our hearts bad.

“Even Brother Sammie?” (our preacher…every child is surprised to learn that the preacher is a sinner, too!)

I told Parker that even though we were born that way, we could ask Jesus to come and live in our hearts and He would clean us. I could see a sincere troubled spirit in Parker that day as he played around the house.

I labored over whether or not he was ready. Was I brushing him off as too young? Was I influencing him to become a Christian before he was ready? I prayed about it and gave the labor over to the Lord and snatched it back in my hands and worried some more. Was he ready? Did he really understand what it meant to be a Christian?

Later that week, as we were going to the grocery store, he started crying in the back seat. I asked him what was the matter, and here is what he said to me.

“I want a clean heart. I want Jesus to come in and clean the sin out of my heart.”

Jesus took my doubts away in that moment. I heard Him saying, “Let the little children come to me, and do not hinder them, for the kingdom of heaven belongs to such as these.”

Parker prayed with his dad and me that day right in the car and accepted Christ as his Savior. What a day of rejoicing it was! My heart smiles now just thinking about it.

Later that summer, we were going to his yearly check up at the doctor and Parker was going over the tasks that the doctor would perform for his check-up (gearing himself up for that day all kids dread!). He turned to me and said, “When the doctor listens to my heart, she’ll know I’m a Christian now. She’ll hear Jesus in there.”

I knew he understood that the decision he’d made was permanent. He knew Jesus was in his heart for good. Yes, he had more to understand and learn, but a change had been made in Parker and his name had been written in the Book of Life.

Fast forward a few years later to our second son, Peyton. He is a very different his older brother. Peyton has always marched to the beat of his own drum and he declared himself a Christian when he was almost five years old.

“Peyton, what makes you say you’re a Christian?”

“Because Parker is. And I want to be a good sport,and I want to get bab-u-tized, and so I need to be a Christian, too.”

Hmmm. I imagined myself as the guy in those Cheez-it commercials, marking “Not Ready” on the clipboard.

Peyton was definitely influenced by his older brother to start asking questions about becoming a Christian. He would initiate the conversation, and as his dad and I would start explaining Christianity, his eyes would sort of glaze over and he’d begin to look around the room for something more fun to think about.

I had a peace this time that God was working on Peyton’s heart and when the time was right, He would lead our youngest boy down the path of salvation as well.

And a few weeks ago, He did. Peyton became increasingly aware of the state of the human heart. He spoke often about how we were born with “bad” hearts and how the only way to fix our hearts was through Jesus. There came a point where he felt an overwhelming urgency to make his heart clean before God. He prayed to ask Jesus to forgive him for being a sinner and asked Him to come and live in his heart. He happily told his friends and family of his decision. I won’t forget him telling his Meme over the phone, “Jesus fixed my heart, Meme! I’m a Christian now!”

Do my boys understand everything there is to know about the Christian life?

But they will learn as they grow in Christ.

Do I understand everything there is to know about the Christian life?

But I will learn as I grow in Christ.

Here’s what they did understand:

1. We are sinners.  There is a penalty for sin.

2. God gave us Jesus to save us from our sin. Jesus is a free gift and He takes our sin away and “fixes” us.

3. All we have to do is pray and ask Jesus to come into our hearts–into our lives– in order to accept His free gift.

4. As Christians, we are new people. We will still mess up, but God will continually grow us and change us according to His will. We have to make a conscious effort to have a relationship with Him, by prayer and the study of His word.

When God calls us to salvation, it’s never too early in our lives. And here’s the best thing…

It’s never too late, either.

He will save you.

He will make you part of His kingdom. You will shine like the sun.

“Then the righteous will shine like the sun in the kingdom of their Father.” Matthew 13:43 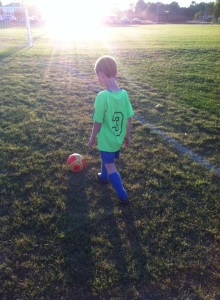 13 Responses to Is My Child Too Young to Become a Christian?