Being a kindergarten teacher, I have a special hidden talent that amazes my husband. I can read almost anything written by a child and make meaning out of it! It’s a talent that is shared by all other kindergarten and preschool teachers worldwide. Sometimes, there can be no words, only pictures, and we can talk to the child who wrote the piece and still be able to “read” the story.

This is a skill that has to be learned. During my first  year of teaching, I had many interactions with my little writers that ended with me pasting a plastic smile on my face and saying “Ohhhh, that’s….nice. That’s…., now, what is that?” I still pray for my students that had to have the 21-year-old during her first year of teaching!

After a few years, I grew wiser, and began studying the work more closely. When a five-year-old proudly showed me his most prized story–and it looked to be scribbles and a string of letters–I would say something like “Oh, yes, you’ve used lots of brown lines here…tell me about your story…” That way I wasn’t letting on that I had no idea what was written on the paper.:)

Somewhere along the way, as I became a bit more “seasoned” as a teacher, as the paperwork and routines and classroom management became more like a second nature to me, I began to have more time to really get to know my students. I was no longer overwhelmed by the testing and the materials and walk-throughs, so I actually had time to talk with my students and listen carefully to what they were saying to me.

I began to know the little writers who so eagerly expressed what they had to say. My classroom’s Writing Workshop became one of my favorite parts of the day. It still sends a little jolt to my heart to get to say “Okay, writers, let’s meet up on the carpet. We need to talk about what we’re going to do as good writers today.” They are so excited to see what I’m going to tell them about writing, and then–this is the best part–they all rush back to their seats because they believe that they can do the same thing. They haven’t learned about fear and self-consciousness yet. If Mrs. Givens says that they are writers, then they believe that they are writers!

So for the past few years, one of my favorite past-times has been to read young children’s writings, with their fun invented-spelling and colorful illustrations. When my oldest son was in kindergarten, he brought home his journal one night for his family to read. On one page, the words looked like this:

I have found that the more I know my students, the easier it is to read their writing. One of my sweet students wrote this on our Daily News board last year. 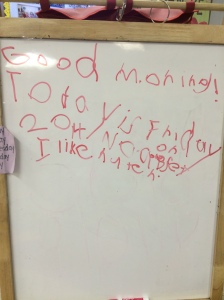 Translation: “Good morning. Today is Friday, 2014. No one is absent. I like huntin’.” The last sentence took me a minute to translate, but I thought of the writer. What did he like to do? This particular writer is a fisherman and hunter so I quickly deducted that he was saying “I like to go huntin’.”

You see, when you know the writer, it’s easier to know what their message is.

I have gotten to meet so many writers this year, besides my usual kindergarten friends. I’ve met up with some great bloggers, songwriters, poets, columnists, authors, and composers. I have found that when I meet and befriend writers, their works become so much more meaningful to me. When I hear a song on an album that was written by a friend, I get so excited because I know the writer. I know what their message is!

Last week I was at a concert and the singers began to set up a song that a friend from a songwriting conference had written. I was so excited. I began telling all of the people around me “I know this one! Well, yes, I knew the other ones, too, but I know the writer of this one. I know the writer!”

The message is so much more meaningful when you know the writer.

Our Father is a Writer. He is the Writer of the universe, the Author of creation. He has illustrated every detail of your life, outlined each chapter and paragraph. When I think back on the history of the world and to the unknown of the future, I am amazed that I know the Writer. He holds the pen. And sometimes, when we are listening very carefully to Him, He whispers His words into our hearts and let’s us write them down for Him. What an honor it is to know this Writer. I’m so glad that I don’t simply know about Him, I know Him personally. I have found that the more I know Him, the closer I draw to Him, the easier it is to understand His Word. The easier it is to hear His voice. I am able to find clarification and meaning in the story He is writing for me. How well do you know the Writer, friends?

I love the hymn “Draw Me Nearer” by Fanny J. Crosby. I have made it my prayer lately. The closer I am drawn to Him, the more I know Him. The more I know Him, the clearer His words are to me, whether they are words written in the Bible or whispered to me by the Holy Spirit. “Let us draw near to God with a sincere heart and with the full assurance that faith brings, having our hearts sprinkled to cleanse us from a guilty conscience and having our bodies washed with pure water.” Hebrews 10:22

Here is my version of Crosby’s “Draw Me Nearer”. Take a listen!

This entry was posted in Uncategorized and tagged faith, Jesus, music, teaching, writing. Bookmark the permalink.

8 Responses to Draw Me Nearer